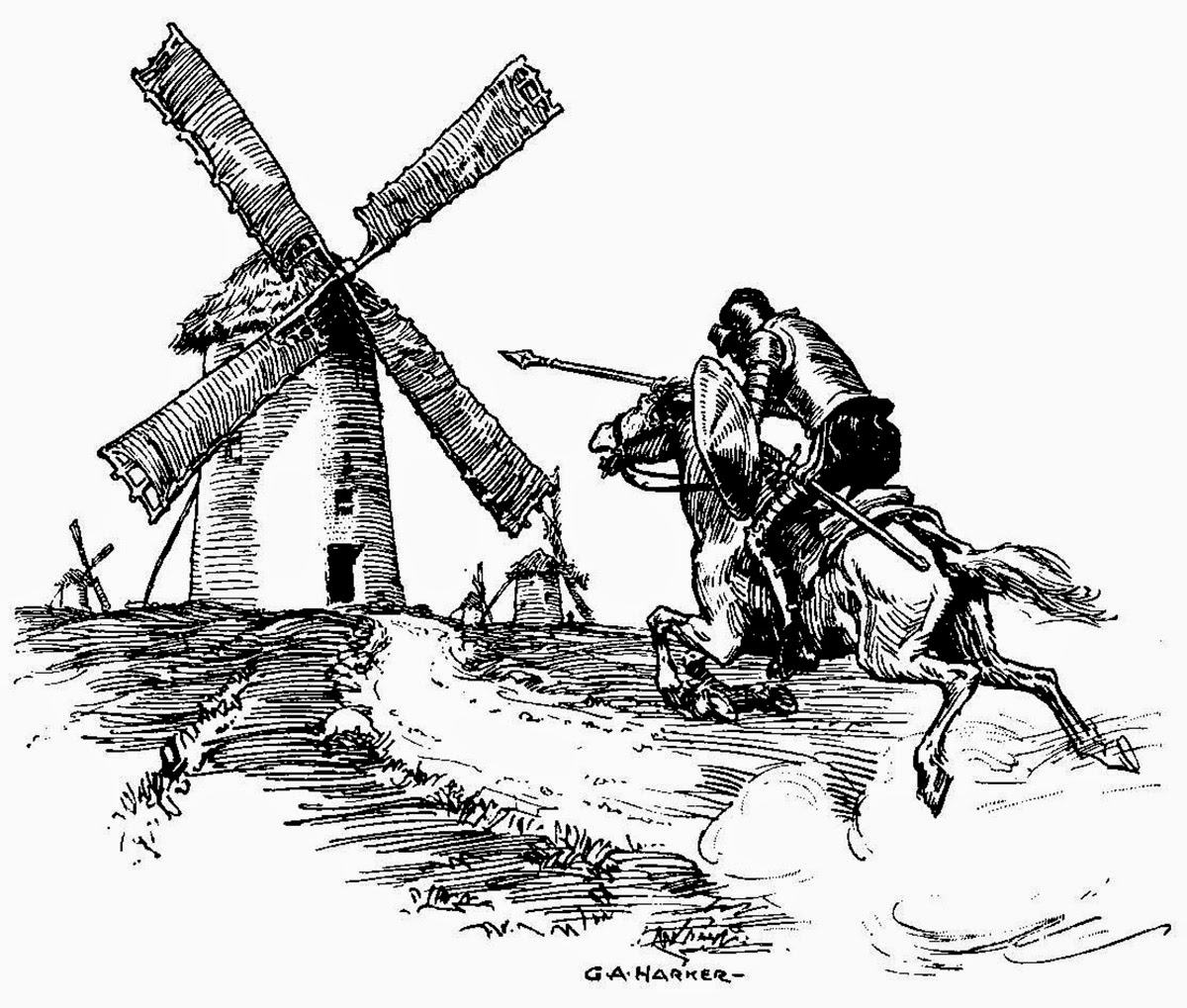 A good number of academics have come to the conclusion that with the Ingenious hidalgo Don Quixote de la Mancha , Miguel de Cervantes, he declared the death of Old Spanish, at the same time that he invites us to reflect on the language itself, establishing a bridge towards the modernity of the language.

From these pages we want to offer all those who are currently studying, or are going to start their studies of the Spanish language , "the Cervantes route for students of Spanish" , with the idea that they can walk through places that somehow had to see with said work.

Naturally, our route could not start from another place that was not Alcalá de Henares, because it was the city that gave birth to Miguel de Cervantes and in it, you will be able to feel the sensations produced by its historic district and its university declared a World Heritage Site by the UNESCO.

If you are interested in studying the language of Cervantes in his native land, you can find out at the following link:

What does Alcalá de Henares offer you?

To get to know the city, start your route on Calle Mayor to continue through the beautiful Plaza Cervantes (where you can discover the curious Patio de las Comedias) then walk to its famous University. Afterward, head to the Cervantes Birthplace Museum, which is a recreation of the house where some scholars suggest that he was born and spent his childhood.

In the Cervantes house you will be able to feel the sensation of going back to the 16th and 17th centuries discovering the typical house of the time, with its kitchen, dining room, cabinet and surgeon's office (which was the profession of the father of Cervantes). With a bit of luck you could attend one of the workshops or shows that are organized there.

After the visit of Cervantes's house, you can go on to contemplate the rest of the monuments of Alcalá, including its cathedral , before tasting the tapas in some of the many bars in the city. Finally, you can choose to spend the night in Alcalá or drive to Madrid, just 30 km away.

Visit the city of Madrid

If you have chosen to sleep in Madrid, you should take the opportunity to leave early in the morning with the purpose of exploring the city. But if you don't have time, before leaving the city, you can go visit the Church and Convent of the Barefoot Trinitarians (Calle Lope de Vega, number 18). In this Church it is certain that Cervantes and his wife are buried. You will be able to see a funerary monument built in his honor and read a plaque that contains a fragment of one of his works: "Time is short / fear only increases / hope decreases / and yet / I do not live only desire / live."

Here you will find out where you can study Spanish in Madrid.

In the province of Toledo is Esquivias, where a stop is obligatory because it is here precisely where Cervantes's wife was born. In this city they were married in 1584. In Esquivias there is still their house known as the “ Casa de Cervantes ” which is currently a museum that can be visited.

Half an hour by car is the capital of Toledo, a beautiful city that has been declared a World Heritage Site and nicknamed the "City of the Three Cultures" . In Toledo you will be able to see and visit a multitude of historical places such as its extraordinary cathedral, its mosques and synagogues such as the one called, El Tránsito, which is near the Sephardic Museum.

If your desire is to study Spanish in Toledo you can find out at the following link:

Our next stage of the route is only 60 km from Toledo: Consuegra. You are getting closer and you will see its famous windmills better and better. You climb the hill and you will be able to see the twelve best-preserved mills in Spain with a wonderful perspective.

The extraordinary thing is that each mill has its name related to Don Quixote. Precisely the one that attracts the most attention is the so-called "Sancho" from the 16th century. After 30 minutes by car you will reach the Alcazar de San Juan , of which Cervantes is the prodigal son. According to the municipality, the writer was baptized there in the Church of Santa María la Mayor.

Less than ten kilometers away you will find another land of giants called Campo de Criptana, in it are the authentic mills that according to tradition inspired Cervantes when he wrote Don Quixote.

You can participate in organized visits , as there are visits throughout the year.

The next stop should be El Toboso, about 20 kilometers away: “ Dulcinea del Toboso is the most beautiful woman in the world, and I, the most unhappy gentleman on earth. My inability to support it should not compromise this truth . " Words of Don Quixote .

There it is a must to visit the Dulcinea house museum , built like a 16th century castle in La Mancha. Probably, this would be the house of Ana Martínez Zarco de Morales ("sweet Ana"), from whom it is assumed that Cervantes was inspired to create the character of Dulcinea. In the Plaza Mayor you will also find the monument that the town of El Toboso dedicated to Dulcinea and Don Quixote . You will also want to see the Cervantino Museum , which houses numerous editions of the work in a wide variety of languages ​​(up to 70).

We continue our route for about 50 km to Argamasilla de Alba, where you must visit the Casa de Medrano . Indeed, it is here where the Medrano cave is located, in which Cervantes was imprisoned, and where it is supposed that he would have begun to write the adventures of the ingenious hidalgo.

Then, we continue our way (about 50 km) to Ossa de Montiel . Here two very important passages of Don Quixote's adventures take place, more specifically in the magical cave of Montesinos (where our hero immersed himself there through time) and the ruins of the castle of Rochafrida . To visit the cave, it will be necessary to make an appointment with an authorized company: check with a tourist office.

You arrive at the end of the trip and you should take advantage of the morning to discover Ciudad Real and some of its monuments, such as the Puerta de Toledo or the Cathedral of Santa María del Prado. A visit to the Don Quixote Museum in the city is also a must, where it is curious to see how the reproductions of the characters in the book "speak" to each other.

Also in the afternoon you can go to Almagro, which is half an hour away by car. Almagro is one of the most beautiful towns in Spain. Its Plaza Mayor is already worth getting there to see it. It is also recommended that you visit the comedy courtyard dating from the 17th century.

End of our "Cervantes Route for Spanish students"

Although the route is designed to be carried out for a week , it is also on purpose to choose one of its historical places, from which we suggest you to study or improve your Spanish, and thus be able to enjoy it quietly for the duration of the , or the courses you want to attend.

And during this time there are several dates on which activities related to Cervantes are offered. For example, the Cervantes Week, which is celebrated at the beginning of October in Alcalá de Henares, while World Book Day is celebrated on April 23 throughout Spain.

A tourist train called "Tren de Cervantes" connects Madrid with Alcalá de Henares. A very interesting experience, especially if you travel as a family, since the route is animated by actors who also make you taste typical sweets.

It is more than certain that the landscape and the memory of the work, which constitutes the starting point of the modern Spanish you want to learn, will feed your cultural heritage at the same time that you perfect your Spanish.

We hope that these pages help you to better understand the figure of Don Quixote and his creator. A trip that is really worth it, because as he says: "He who reads and travels a lot, learns and sees a lot".

Is it good to study a language from the age of 65? Differences of Spanish between its autonomies